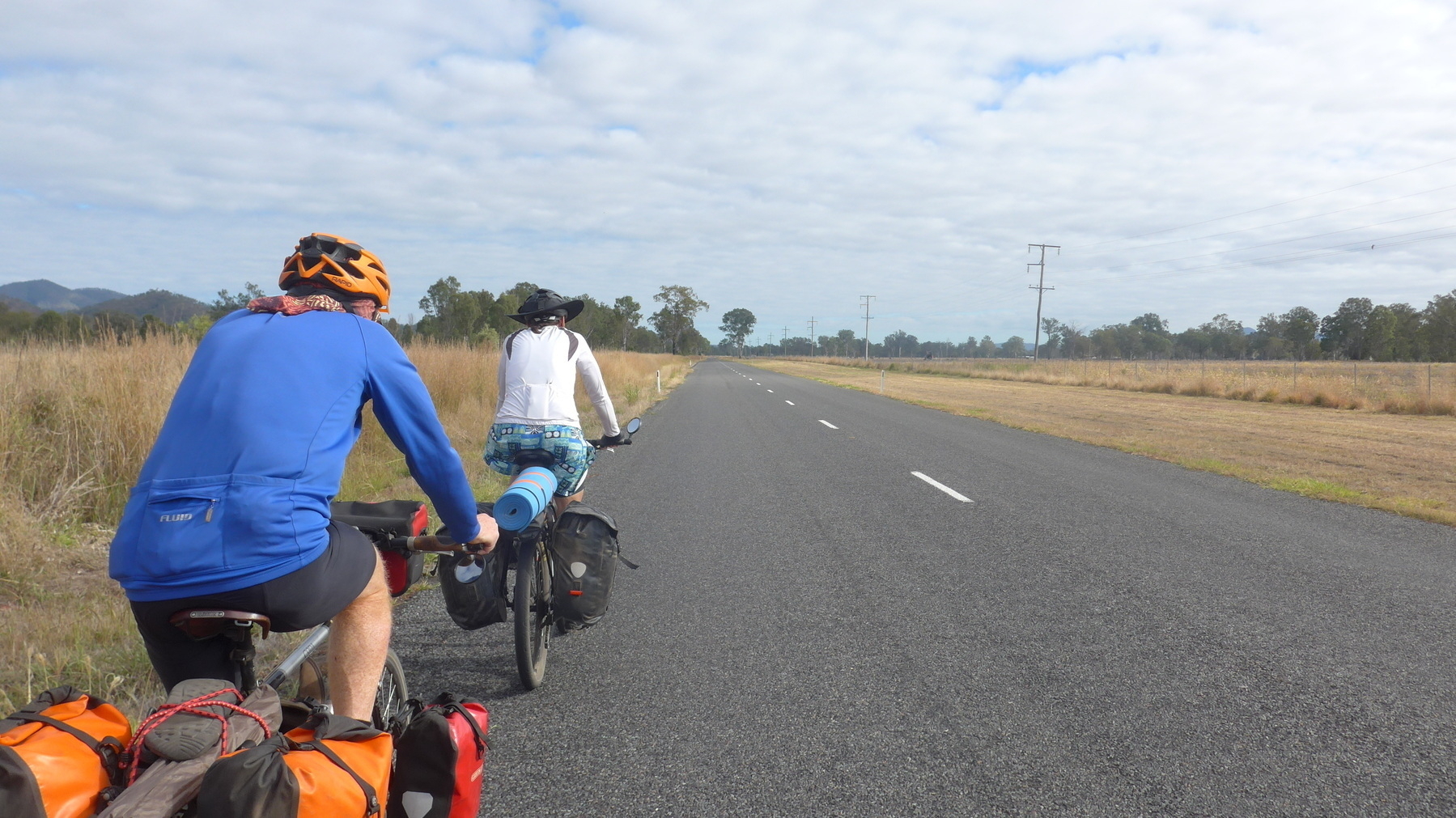 To describe this day as a “transport stage” would seem like I’m damning with very faint praise. But let’s be real. In every tour there are sections which aren’t all that interesting, but still have to be ridden.

This day was all on bitumen roads, some of them quite busy. From Ubobo to Calliope is about 54km, all but the last four km is on Gladstone-Monto Road, which doesn’t have a daunting amount of trucks. Quite a few 4WD vehicles towing caravans, quite a few RVs, not all that many trucks. We stopped for a morning tea break at Calliope, and shared a picnic shelter with a ragged looking dude who was chain-smoking roll-your-own ciggies. He looked like maybe he was homeless, but then was picked up by someone in an almost new Camry and off they went. So what do I know.

With only 25km left on our trip, we packed up one last time and hit the road. We tried to follow what short sections of bike path there were through Calliope, and crossing under the Bruce Highway to join the Dawson Highway into Gladstone.

Our only incident on the way to the Club Hotel (opposite the Gladstone railway station) was a flat rear tyre for me. The culprit was a sliver of wire that my tyre picked up when I rode on the highway shoulder, so I don’t think I can be too hard on the Vittoria Terreno Dry on this occasion. A complication of my own doing was caused by the ghetto rim tape job I did at the Eidsvold Caravan Park, comprising Gorilla Tape torn down the middle (to fit the bed of the rim). The tape had wandered up onto the shoulder of the rim, which was preventing the bead of the tyre from sitting correctly. The solution involved a pocket knife and some careful trimming. 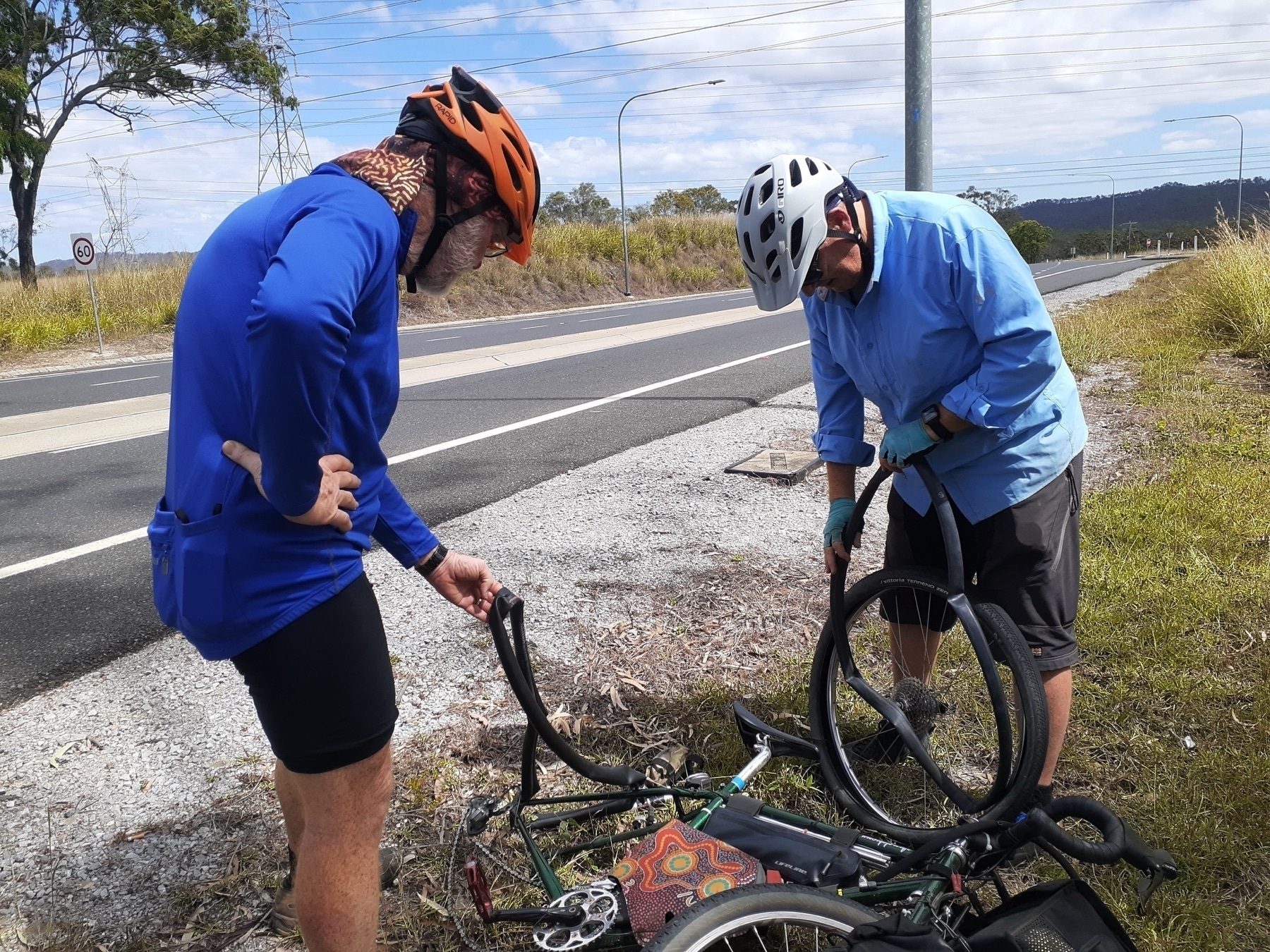 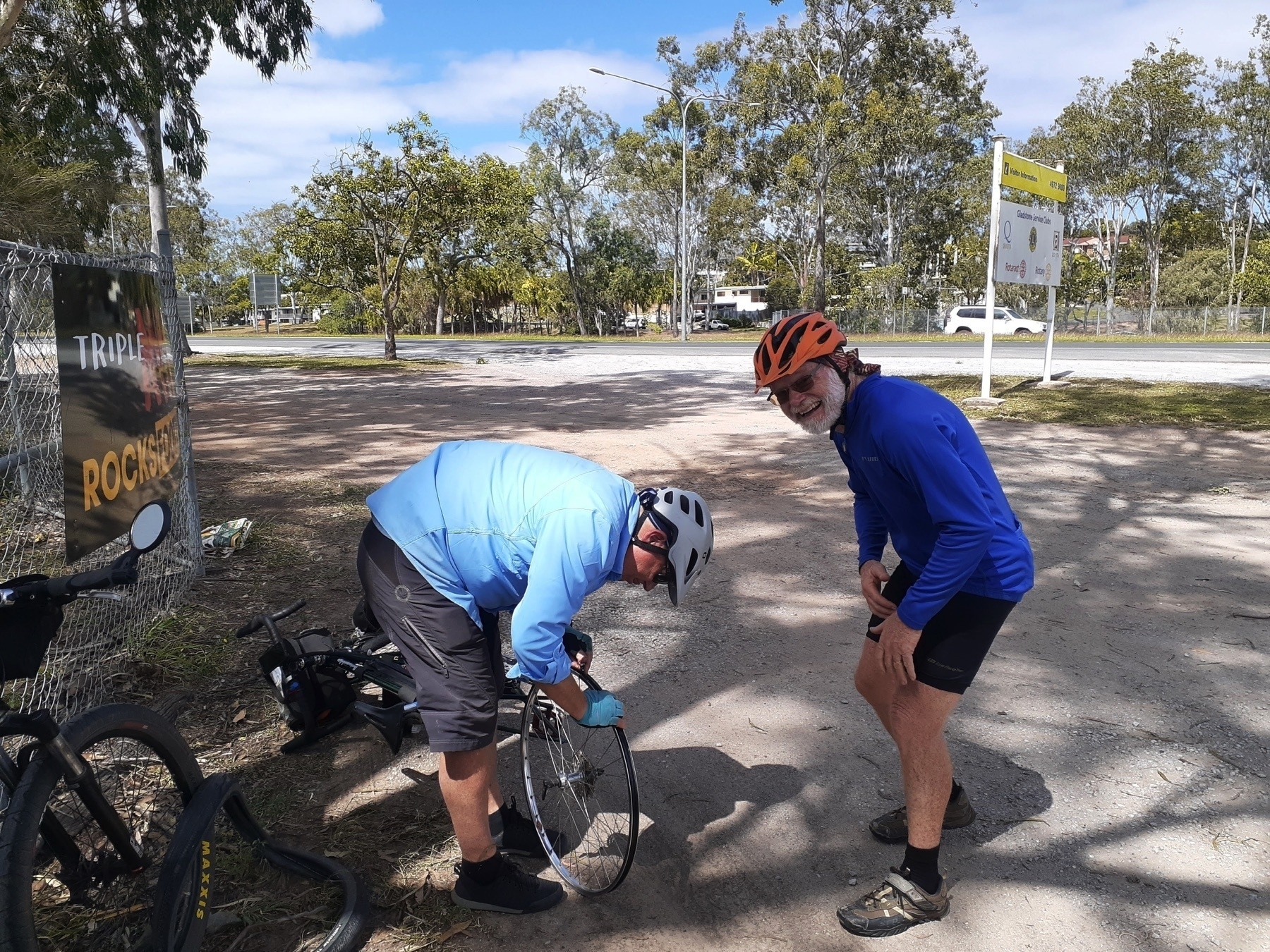 Pretty soon we were having a big bowl of chips at the Club Hotel before a relaxing afternoon. Belinda headed down to Barney Point Beach, and Rob and I retired to our respective rooms. 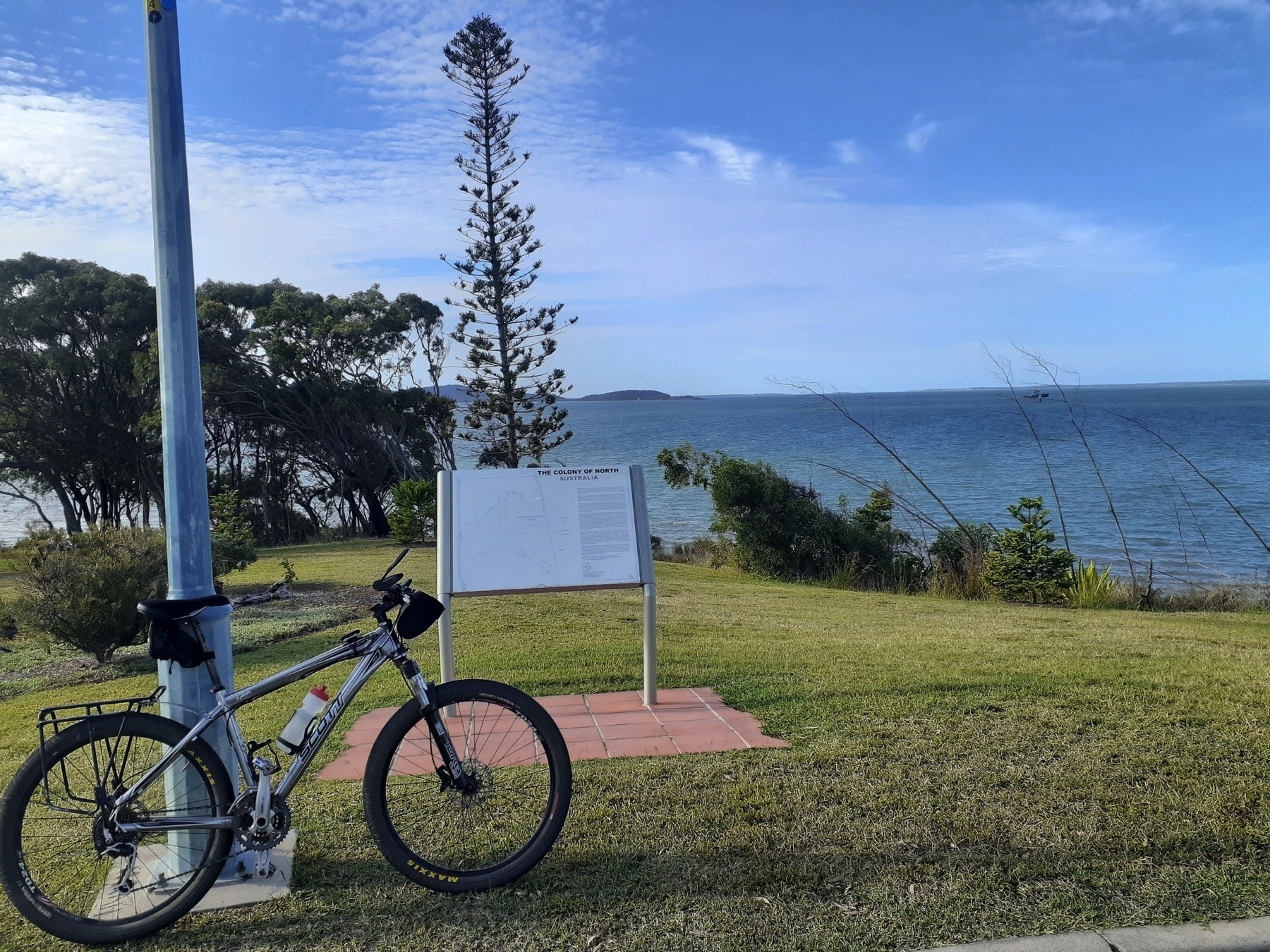 The next day we dropped the bikes off at a local transport depot, and jumped aboard the Tilt Train for the return journey to Brisbane. It is VERY annoying that Queensland Rail doesn’t allow passengers to bring bikes aboard the Rocky-to-Brisbane Tilt Train. Are we “Good To Go” or not? If everybody who reads this guide to the Great Queensland Rail Trail Adventure would like to write to the Minister for Transport and Main Roads about this issue, I would be grateful! Mark loves getting emails. 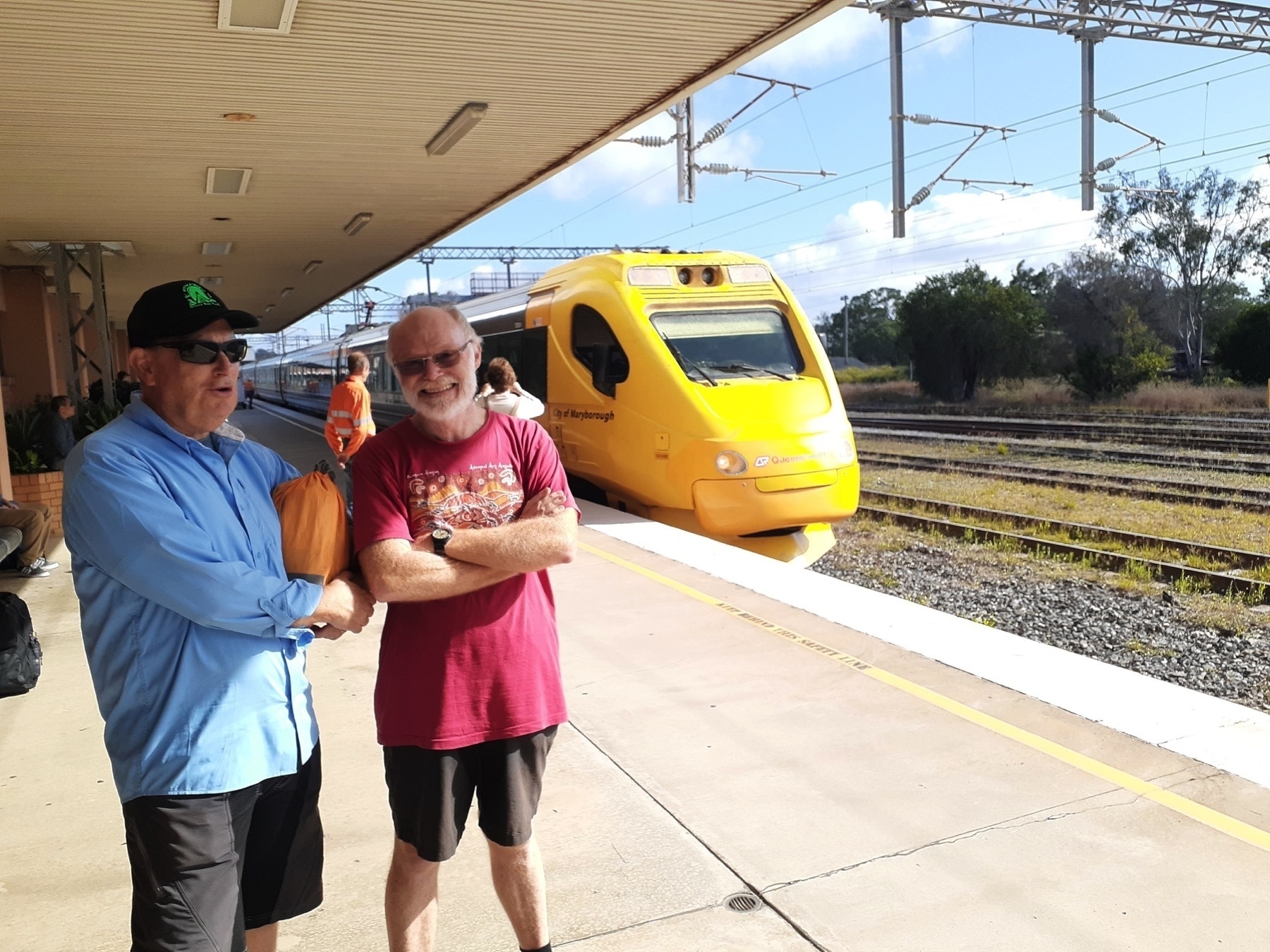 The Tilt Train is a great way to travel. Just lower your expectations for the coffee served by the catering team, and you’ll have a fine time, and probably finish whatever book you were reading on your Kindle.