Next: Day 7 Eidsvold to Mungungo

Gayndah to Eidsvold was our first day riding on the Boyne Burnett Inland Rail Trail.

The BBIRT is a fascinating mix of Queensland history and current day interpretations of that history.

The Gayndah-Monto-Gladstone branch railway scribes a massive 270km arc away from the main coastal railway line through the North Burnett region. It left the main line at Mungar Junction, about 10km south of Maryborough, and rejoined at Byellee, just outside of Gladstone.

Queensland’s railways were mostly built in the 30 year period from 1890 to 1920. Having the railway come to your town was a vital engine of economic growth, and no doubt played a major role in the development of the South and North Burnett regions. 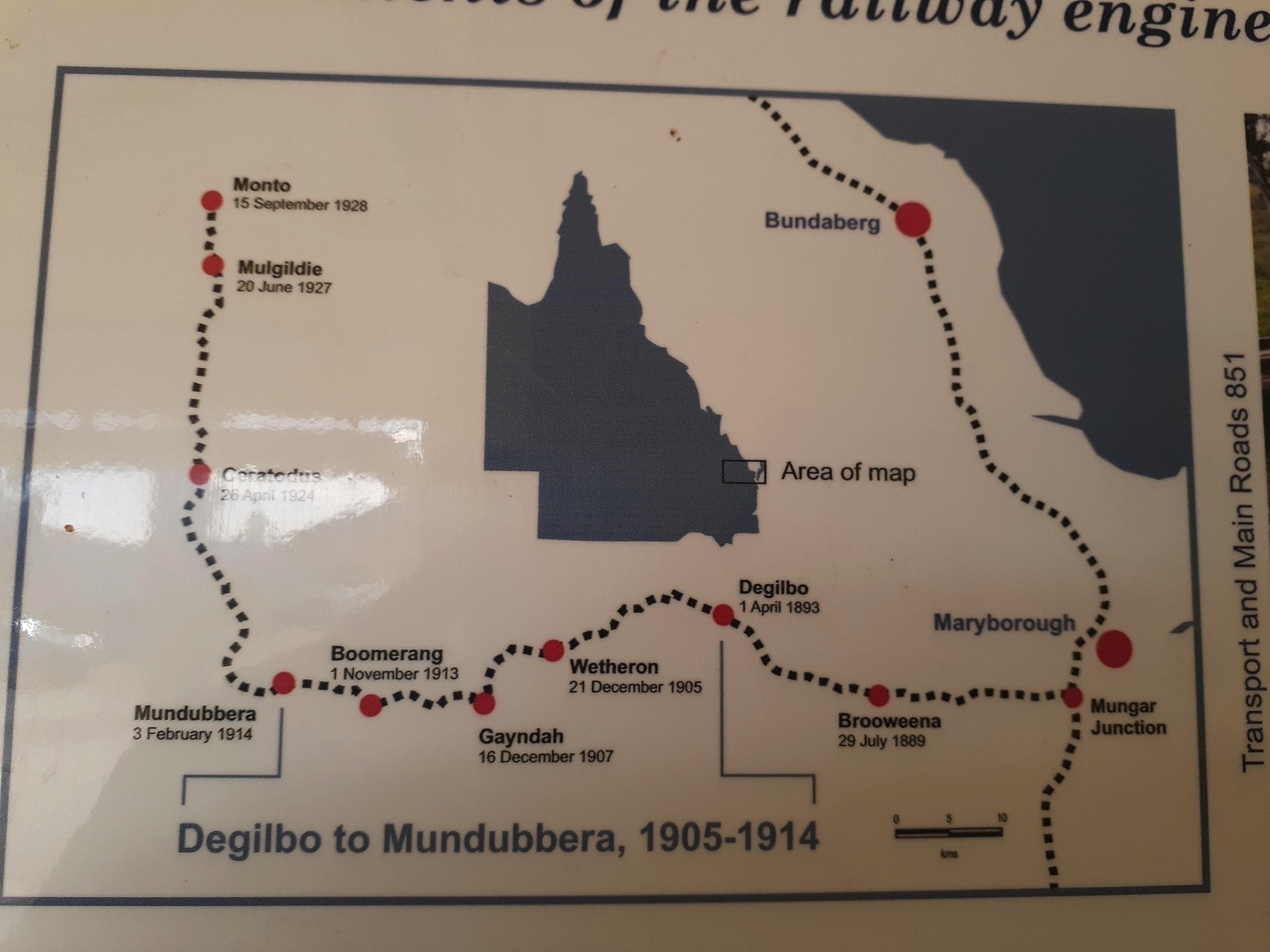 Branch lines all over Queensland declined in usefulness after World War II, and were all closed by about 2000, decades after they had become uncompetitive for both freight and passenger services.

When the railway finally closes, there are often three big ideas about what should happen to the line.

The first is that the line should be preserved just in case there is a need to reopen it to service some mine or other. Or maybe a sugar mill!?

The second is that our branch line would be perfect for a historic railway – a certainty to be a tourist drawcard!

The third idea is turning the rail corridor into a trail for walkers, bike riders and horse riders.

In my view this third option is the only sensible route forward for most disused railway lines. But the pity is that it takes at least 20 years for communities to come to that point of view. In that time many elements of the line can be lost. Bridges get washed away in flood events, maintenance stops and timber bridges especially deteriorate, the line gets leased out to private interests, etc etc.

The Gayndah to Mundubbera section of the BBIRT faces all those challenges.

No trains since the turn of the century means no maintenance for the many bridges.

The line from Mungar to Gayndah has been leased to Isis Sugar, so there’s no prospect of the rail trail back towards Biggenden. The floods over the last 10 years damaged the Reid Creek bridge (the first one out of Gayndah towards Mundubbera) and the Burnett River bridge between Wetheron and Gayndah (also in the off-limits Isis-leased section). 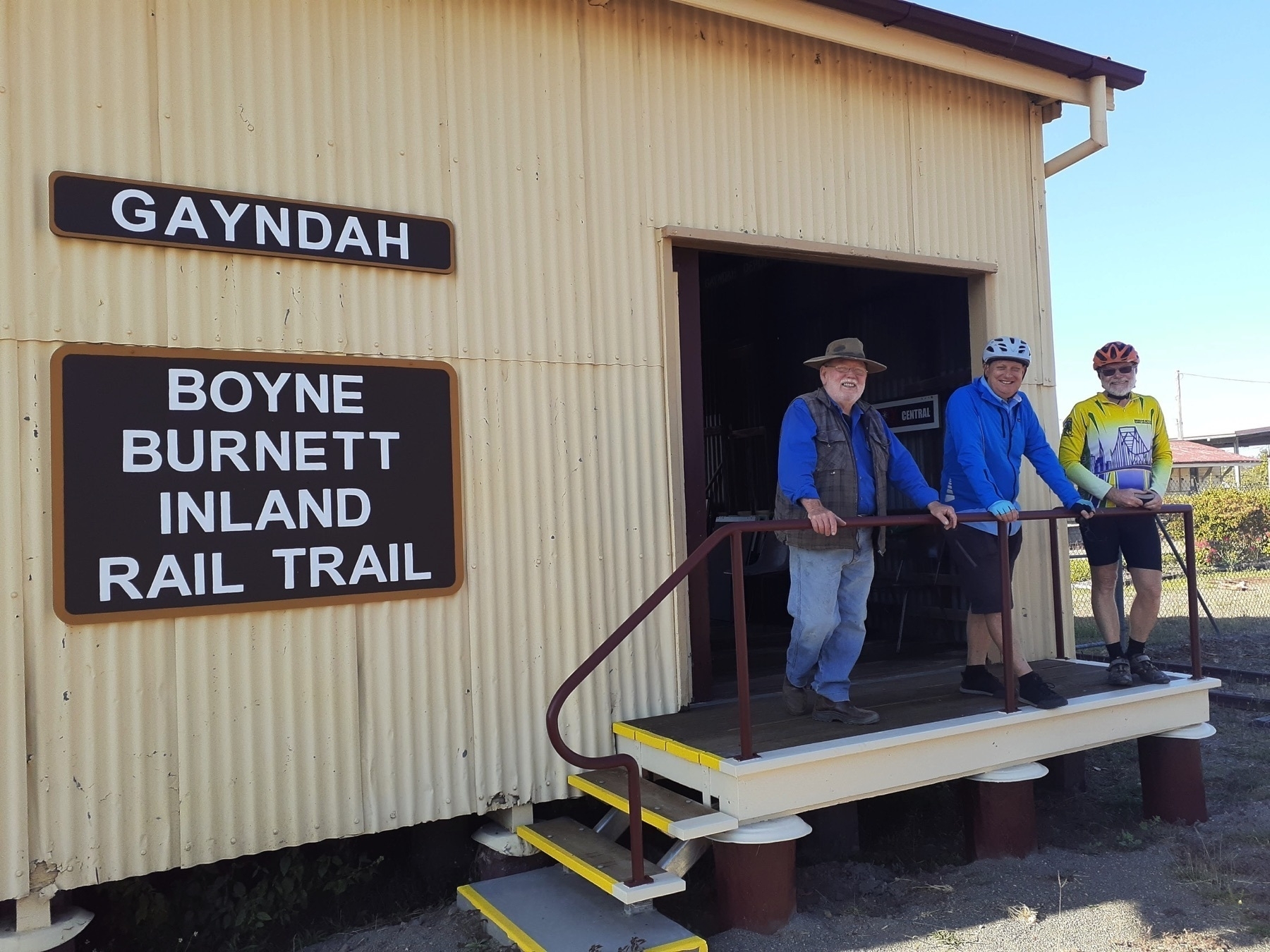 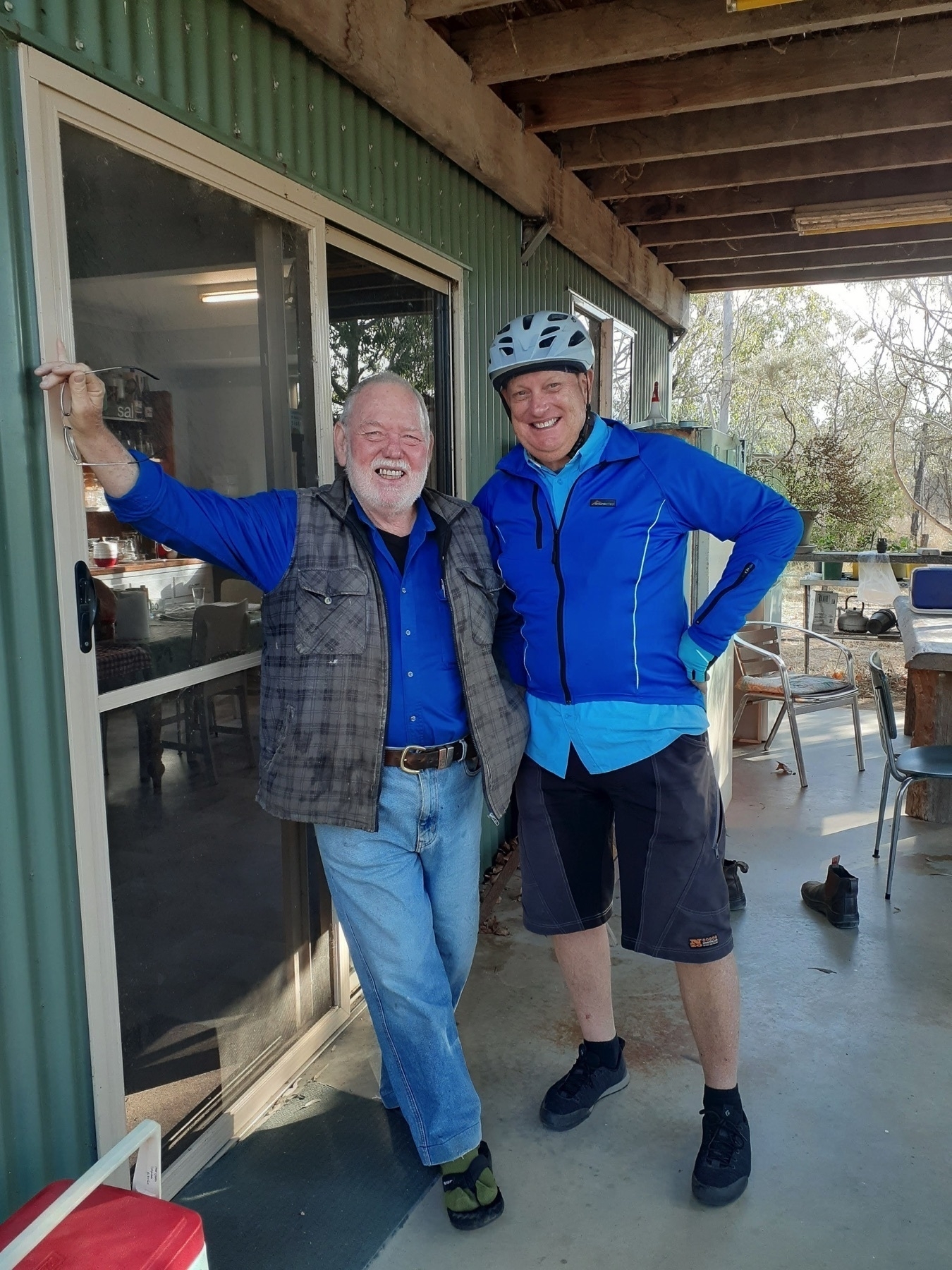 Into this context comes our hero Mike Goebel, and his small team working on the Mt Debateable to Humphrey section of the BBIRT. With Reids Creek bridge washed away, the most reasonable way to access the trail is by riding out on the Gayndah-Mundubbera Road, and turning off at Mt Debateable Rd to cross the Burnett River. 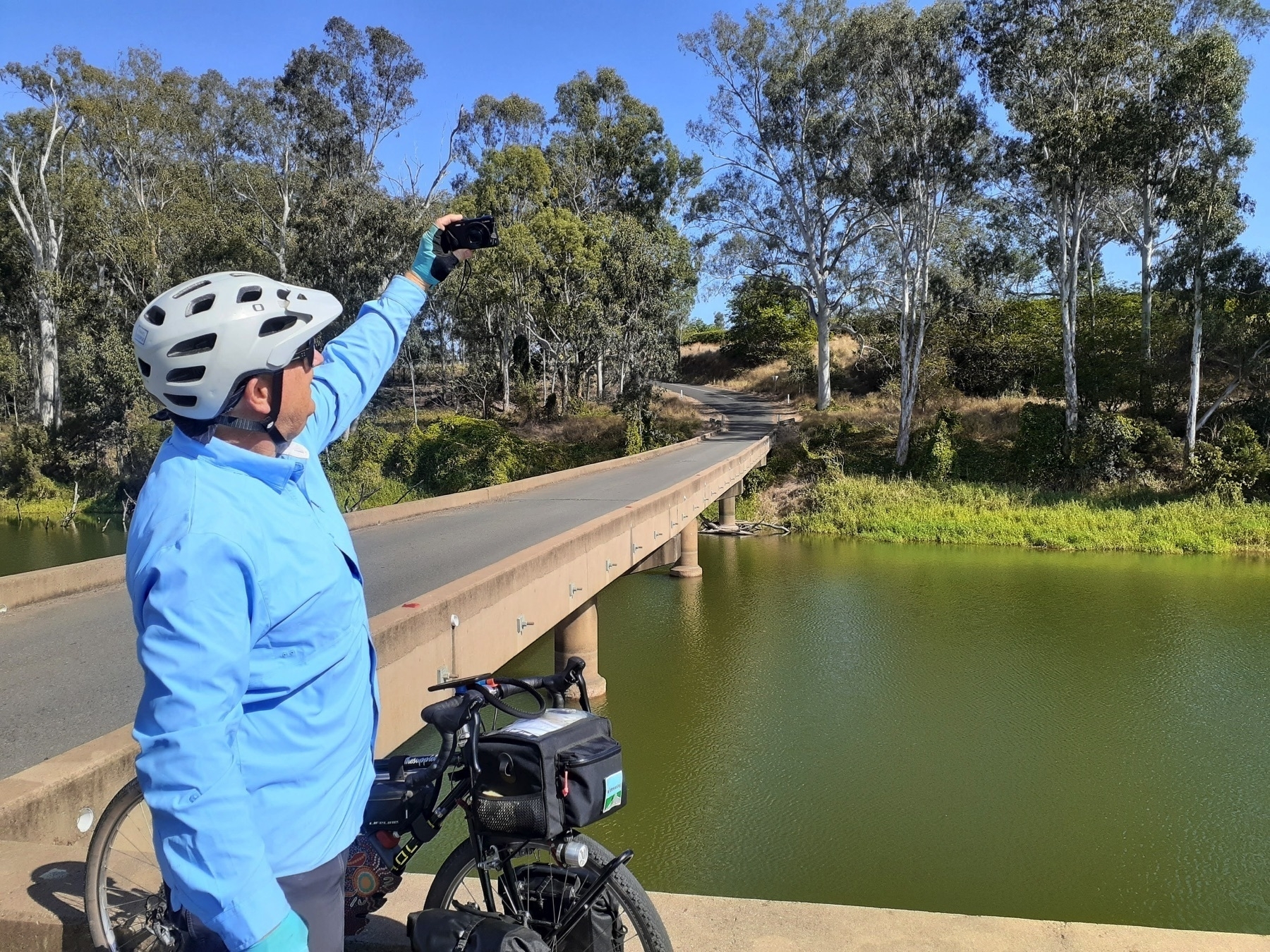 From there we could access the rail trail at Mt Debateable siding, and follow on the trail as far as the Humphrey siding. Then its Boomerang Rd alongside the Burnett River, looking up the gullies at the wondrous bridges (4,5,6,7) that are such a feature of this section. Read more on the history of these bridges here. For me one very cool aspect of the bridges is their variation. There are concrete arches, and steel lattice trusses, and even one called the “upside down” bridge.

The surface of the trail throughout these sections is what we might call “unimproved”. Some sections are a little bit rocky, some have substantial patches of sand that rob you of your momentum. 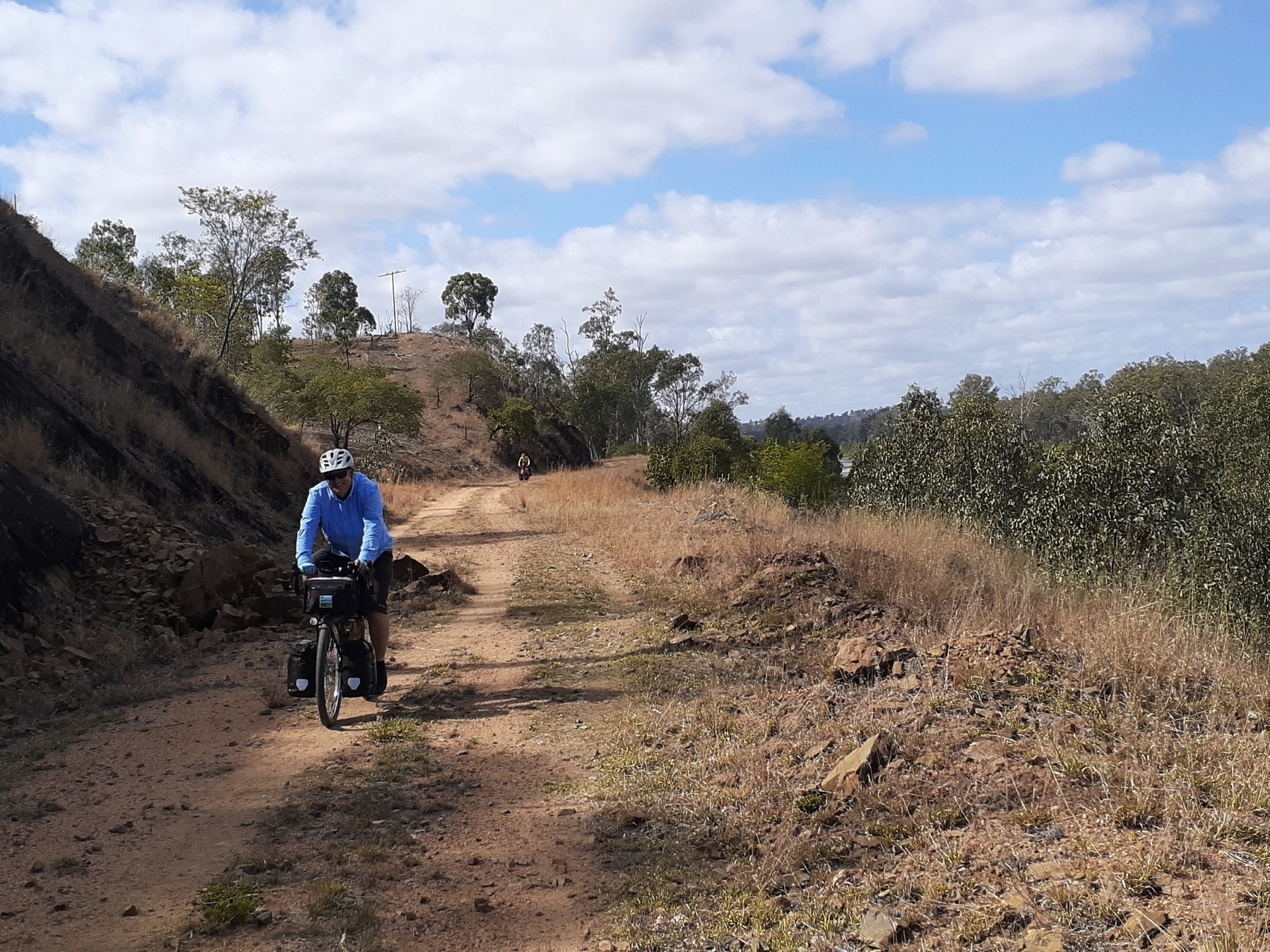 By the time we made it to Mundubbera for lunch (Mike arranged for us to meet the councillor for that town as well) it was well past 2pm and our average speed for the day was under 10km/h. With the temperatures above 30 deg C and some uncertainty about our route for the next stage, we just rode the Burnett Highway to Eidsvold. The traffic was not a problem and our group (by now a trio as Brett had decided to return home after the ride into Gayndah) rolled into town with about 45 minutes of daylight to spare.

We stayed at the Eidsvold Caravan Park. As the BBIRT has not officially come to Eidsvold yet, I get the feeling that touring bike riders are not as common as on the BVRT or KKRT.

The Corner Motel Cafe is the best spot for dinner in Eidsvold. It might also be the only spot as the pub wasn’t serving evening meals when we were there.

The Corner cafe was so good we came back for breakfast the next day!

Where to stay in Eidsvold:

Next: Day 7 Eidsvold to Mungungo.