We’re getting closer to the big day (the opening of the Barrimoon Tunnels section of the BBIRT). Today is the day before, and our little trio of touring bicyclists are starting to feel like we are part of something much bigger.

We had surprising encounters with locals when we stopped for refreshments. At Mulgildie, the man behind the counter at the shop had seen us out on the road, and knew we were riding to the rail trail event. At Mundubbera, a chance encounter at the takeaway cafe saw us chatting to someone who lives next to the rail alignment at Grosvenor Creek (south of Eidsvold), who wanted TMR to remediate the access to her property. At Eidsvold Caravan Park, it seemed everyone we spoke to had either seen us on the road, or knew where were going!

Our ride today saw us take a brief look at the rail trail alignment from Eidsvold heading north to Ceratodus siding. (Ceratodus is a lung fish which lives in the Burnett River, although Wikipedia tells me that botanically the Queensland lung fish is not actually a ceratodus cos they became extinct in the Eocene Epoch.)

Rob and I rode the trail alignment for a couple of km, and then jumped out onto the highway. Belinda on her Hookworm-tyred mtb stayed the course, and said the trail wasn’t too bad (thanks to the work of Michael Whitty, local trail carer). 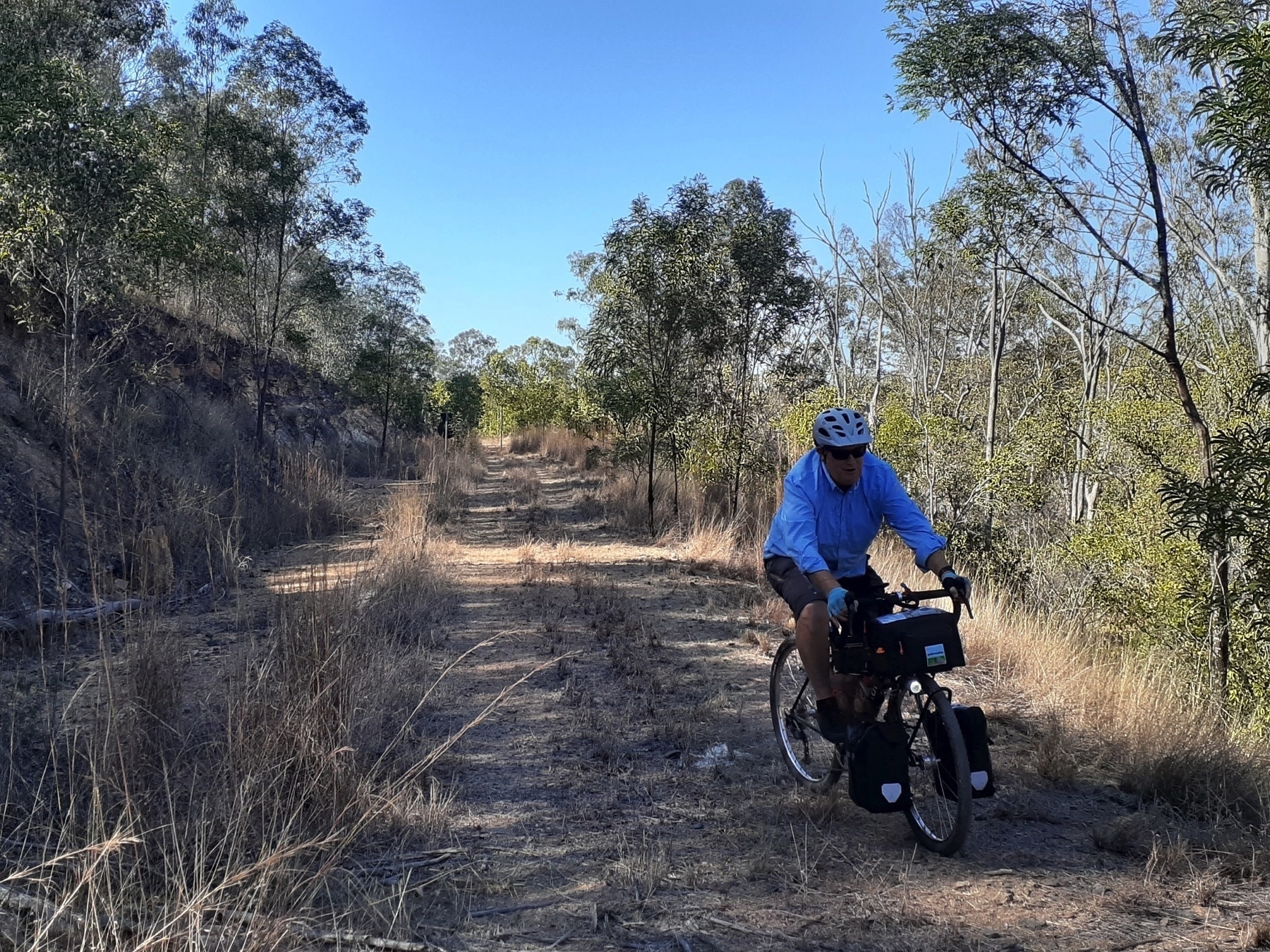 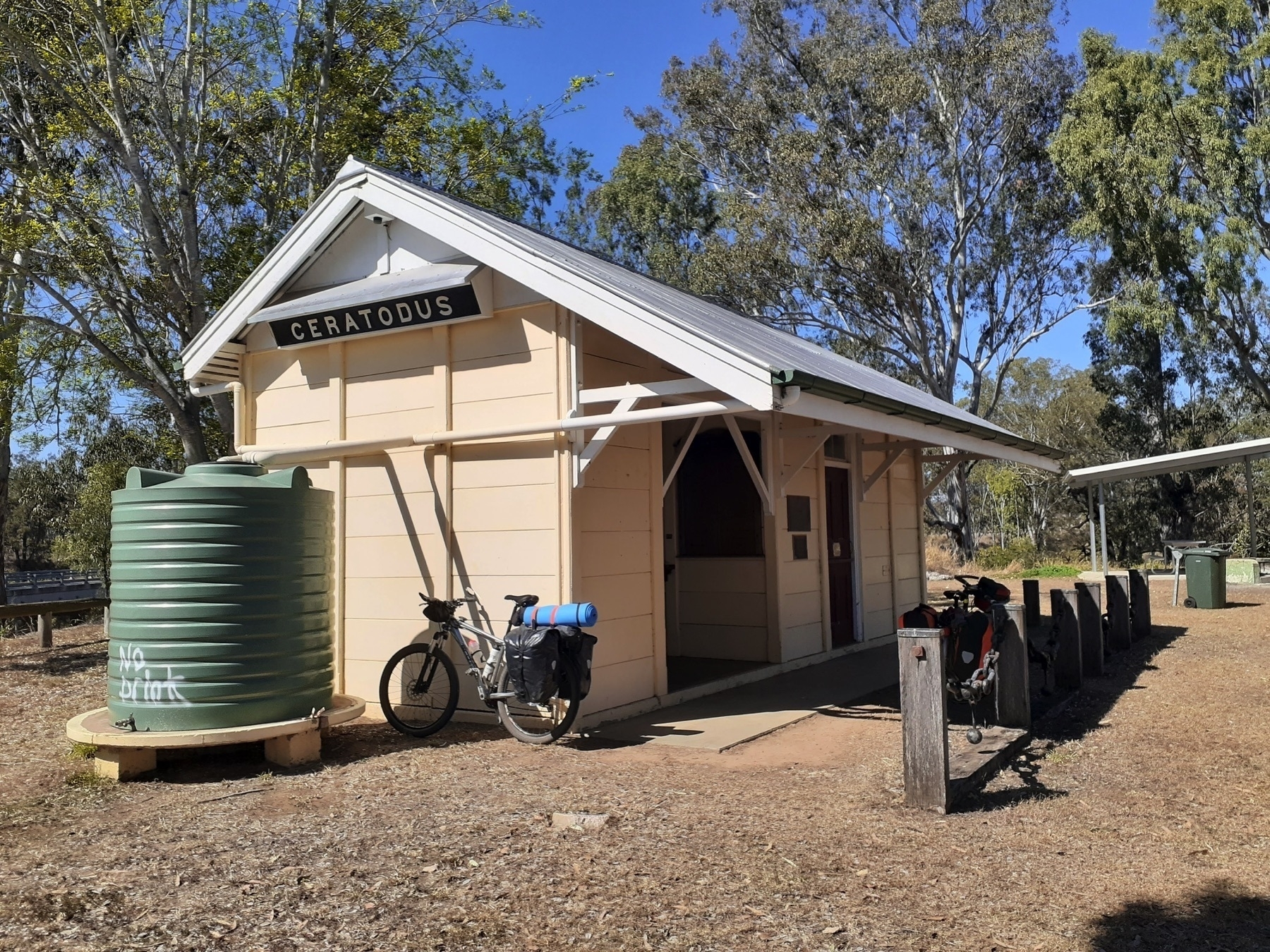 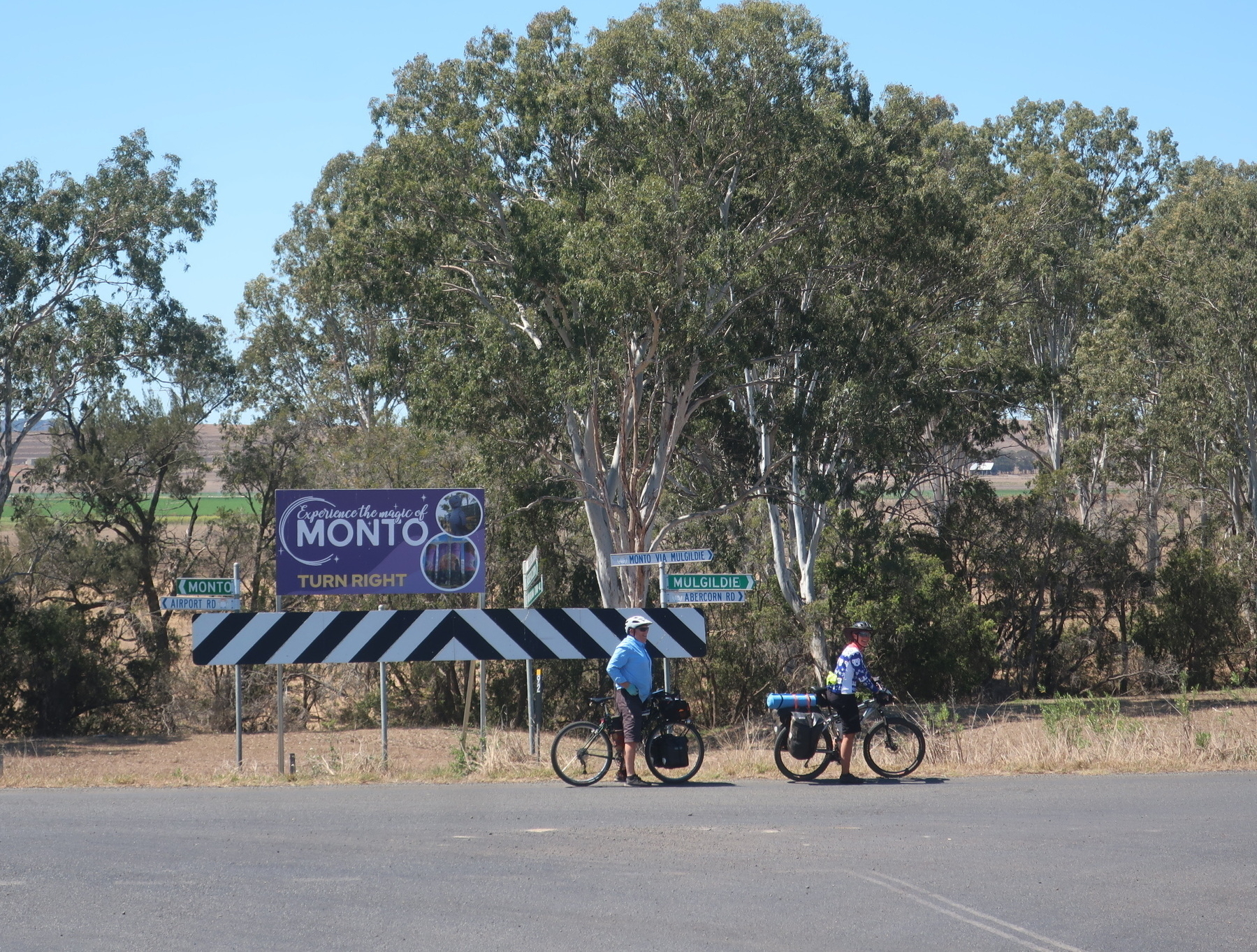 We turned off the Burnett Highway at the turnoff to Wuruma Dam, and then followed back roads to Abercorn and on towards a rest break at Mulgildie (53km). It was a warm day, and by the time we reached Monto (68km) via Airport Rd we were looking for a cafe with air-con and cold drinks. 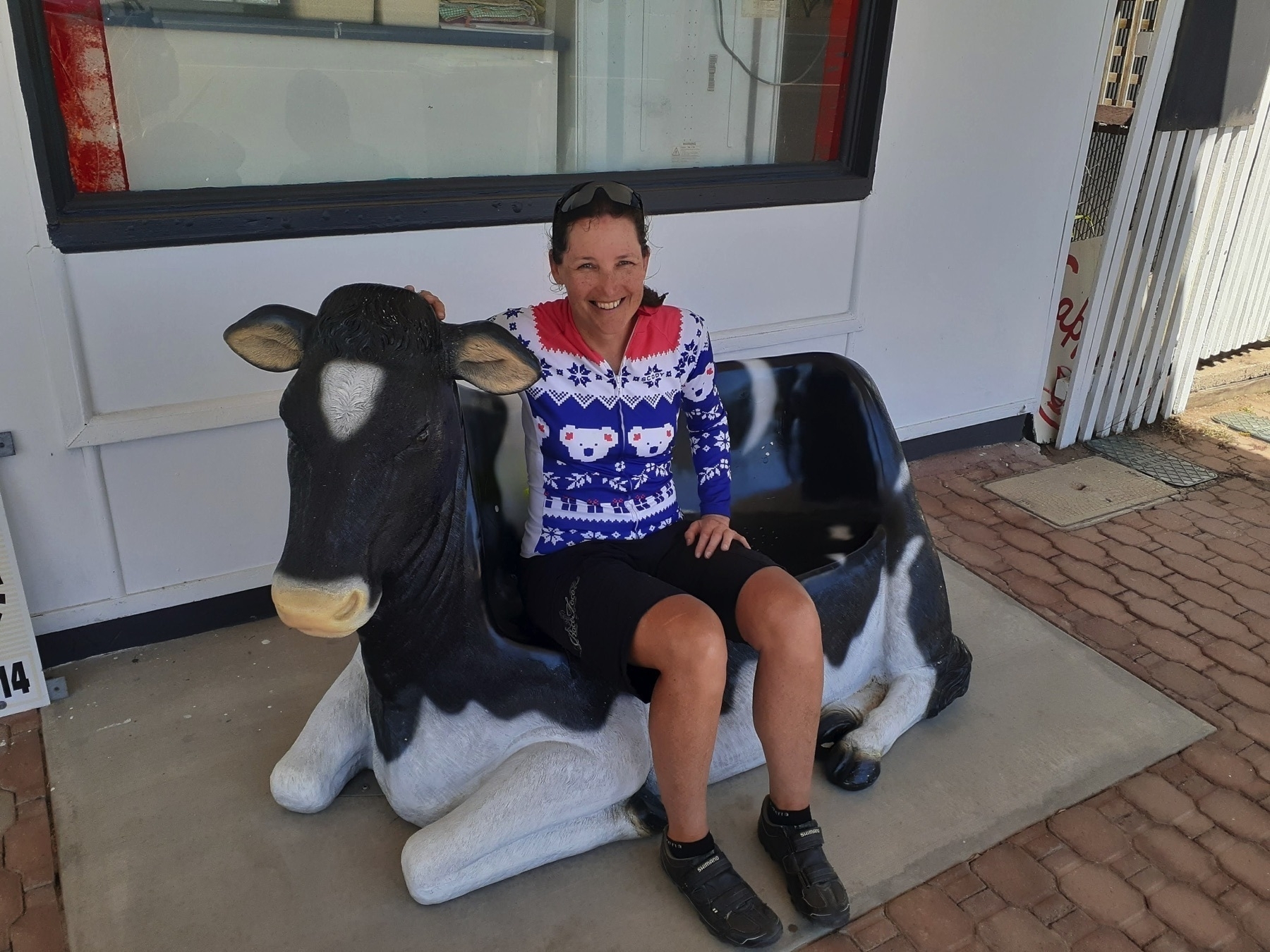 At Monto we were recognised again, this time by TMR’s main man in charge of rail corridors, Craig England, who was there for the next day’s festivities.

Eventually we rolled out for the last 13km to the Mungungo Hotel. Once more we were recognised. I saw a ute pass us, with a bike strapped onto the back. The bike had a Jones handlebar. I thought “I bet I know that rider … there won’t be many people bike-nerdy enough to have a Jones bar who I don’t know.”

And sure enough a few km later, there’s someone taking a photo of our trio from the side of the road, and it turns out to be Cliff, a friend from Brisbane who, like us, is into adventure/touring cycling.

Cliff said “I was watching your posts from the first few days of the ride, and just had massive FOMO, so I thought I would come up to Kalpowar for the opening event tomorrow.”

So after a day of being recognised, and feeling like we were part of something bigger than us, we rolled into the Mungungo pub. When I was planning this trip, I had messaged the Mungungo pub via Facebook to ask if we could camp at the back of the pub, and named the date we would be there, in preparation for the opening of the rail trail the next day.

And the cheerful message came back: ‘For you Andrew, it’s a free room!’

So I said thanks very much, and considered myself some kind of very minor rail trail celebrity.

Of course, when we got to the Mungungo Hotel, the man behind the bar had never heard of me, and my name was not on the booking list for rooms, and the person who had answered my message on Facebook was no longer involved in running the hotel.

For all of that, we did receive a warm welcome at the Mungungo pub, and spent a very pleasant evening there. In terms of other accommodation in the area, if you pressed on to Kalpowar there is both camping and lodge style accommodation there, and there’s a National Park camping area only a couple of km away from the trailhead at Barrimoon siding. But for this trip, Mungungo was the right distance for us, trying to keep the average day to around 80-90km.

Where to stay in Mungungo

Next: The big day dawns.